This was written over ten years ago, prior to September 11th. I was surprised to read (years later) how its import is as relevant now as then – if not more so.

This is dedicated specifically to the Western citizen (who is the protagonist) and more generally to the Citizens of the world. 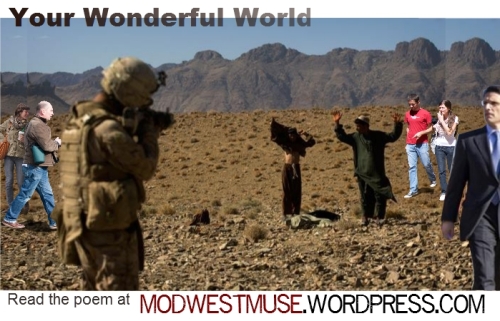 How I wonder at it all.

At the end of the Millennium,

How bravely the champion of time stands out

From the rubble that is the world, and rises from the West.

His face swept by the winds of struggles and the people watching,

The survivors, liberated by the world’s hero,

Cheering and waving the banners.

How I wonder at the sheer strength and courage.

The triumph ended – the show over.

The scene now a memory-painted landscape in my mind

And I look upon it and reflect. I turn and notice

A blotch in the work.

I didn’t see it before from where I had stood.

I had seen the survivors cheering.

But with the bullets in their backs, they were themselves

Screaming in pain; their waves were for help, their banners –

A plea for life. I hear their screams being silenced

Behind the curtain as the show is closing.

I recall now that there was no champion, but rather

A tyrant imposing the rocks upon the struggling

As he had reached the heights.

In the process I had witnessed him making rubble of the world.

How I wonder at his sheer strength and courage.

And with a final bow, the chain around my neck – too late,

How I wonder at it all.

For the poem ‘A Muslim Apolo-gy/-getics to the Non Muslim’, please click here. 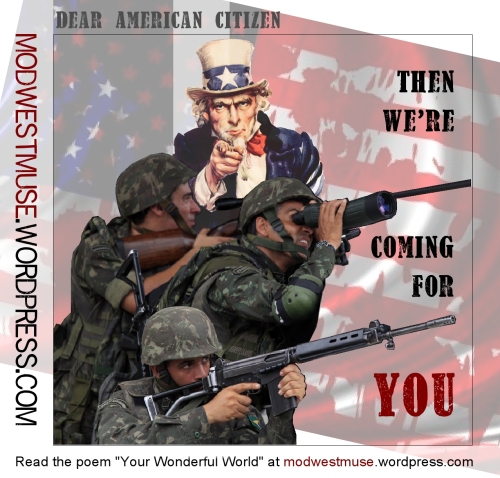 One response to “Your Wonderful World”